Baptist Town Community Development opened the new BT Community Center in May. We are looking for someone passionate about connecting people to resources (such as education, health and employment related opportunities) to join our team in the early growth stages of this community led neighborhood hub.

To apply for this one year Americorps VISTA appointment send a resume to Emily Roush-Elliott at emily@deltadb.org. More information and application links coming soon.

Over thirty people attended a meeting at the new Baptist Town Community Center on Monday night, by far the most that have participated in this type of meeting since I began working in Baptist Town last year. Even better, a lot was accomplished at the meeting with the selection of an advisory board for the center, collecting ideas and volunteer commitments from residents, and celebrating a fresh coat of paint on the building’s exterior with games and snacks. It felt like an important moment in the course of this neighborhood revitalization effort. 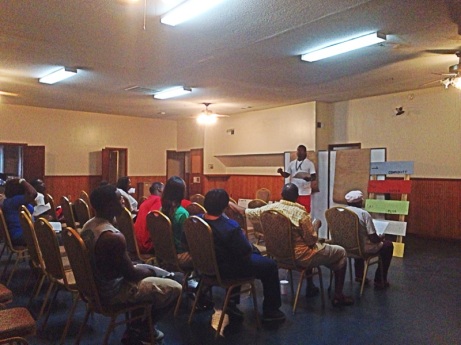 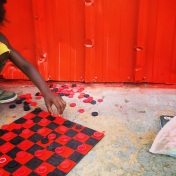 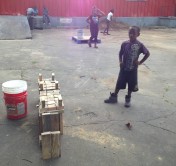 Often when “community engagement” is discussed, the concept is sugar-coated. It is described as meetings where information flows freely and individuals rally around a common cause. The reality of this type of engagement is often far from such a utopia. Issues are rarely cut and dry, and it is difficult to develop a clear understanding of community member’s needs and hopes. Further, many engagement activities fail to attract more than a few participants. When community members do arrive, factions sometimes develop or certain individuals are antagonistic to the point of inhibiting discussion. I have experienced this many times in a variety of locations, so what made last nights meeting different? Trust.

When I arrived in Baptist Town much had been promised and resources were aligned to deliver on these promises, but there was no one in place to oversee actual implementation. We were able to complete infrastructure, park, and signage projects in 2013, and this went a long way toward building trust within the neighborhood, but it’s been months since these projects were completed.

Last week, a group of painters from Resurrection Catholic Church in Wayne, Ill. teamed up with Sherwin Williams to repaint the building we had newly purchased for the community center. From a faded and scratched blue to a brilliant red (selected by community members through a voting process), the building has new life. I think that the trust we build by making good on promises is the primary factor in garnering both the participation and the communal spirit of meetings like the one we held last night. This is encouraging as we prepare to break ground for five of the Cottages (at last), but also a reminder that for the communities we engage with as social impact designers, regular, visible signs of our work are necessary, no matter how small or what form they take. Otherwise it’s perceived as just a lot of talk. 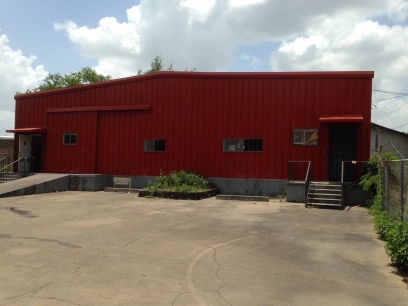