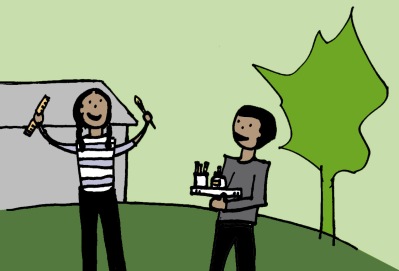 Those of us working in the field of social impact design attempt to enhance neighborhoods, introduce design where it is lacking, and reduce social and economic inequities. Though fellows work hard to serve the public and engage communities, the road to realize projects is often rocky, with the interests of various groups and individuals coming into conflict with each other, the project, or the way in which it is being implemented.

In recent weeks, local politics threw a road block in the way of the housing portion of the Baptist Town neighborhood revitalization project in Greenwood, Mississippi . The road block may have been posturing or it may have been the result of poor communication, but in either case, mud was slung and tempers rose over a deed issue. Diplomacy eventually won out, and the project only suffered slight delays. In the midst of navigating this sensitive situation, a community meeting unlike any I had previously experienced was a refreshing reminder of the big picture goals of this neighborhood wide project.

The Kids Only Community meeting on April 20th involved chalk, markers and imaginations. Neighborhood kids were invited to the playground (currently a basketball court, swings and a few spring rockers), to share their ideas of what could exist on the site. Slides and monkey bars were top recommendations, but we also asked students how this park could incorporate their favorite subject in school (The overwhelming response was math!). Project H’s LearningLandscapes served as a great precedent that allowed both the kids and the adults who helped collect feedback understand how a playground could be a fun and active space, while providing opportunities for learning and fit within a limited budget.

We collected dozens of drawings and photographed the chalk art that spread across the basketball court throughout the meeting. Kids were excited to share their ideas, especially when we asked them to dream up things they hadn’t seen before. An addition to the swing set that would make it look like a dragon, an unlimited supply of sidewalk chalk, and hills to roll down were just a few of the ideas we took away.

Though this playground is a smaller scale and less contentious project than the twenty-six home affordable housing effort that is taking place a block away, the enthusiasm and flexibility that the kids of Baptist Town shared with me on Saturday will be a reminder of the best way to approach future challenges as they arise.

One thought on “a meeting without an agenda”